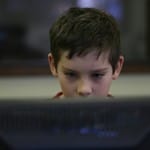 Intensives week, when the class schedule is put on hold while the students sign up for one course that lasts all week, always reminds me why PSCS is the greatest school in the world.

Nic led an intensive about the Cold War, which began with a field trip. After receiving a tip from PSCS alumni parent Knute Berger, now a columnist for the online magazine crosscut.com, Nic arranged for students to have a guided tour of the only federally funded nuclear fallout shelter in the country.

Located under I-5 at the 65th Street overpass, it was intended to serve as a prototype that would be replicated throughout the country: a 60-foot diameter room that could house 200 people for two weeks. It was built in 1961, three years before the Cuban Missile Crisis, but the belief that fallout shelters could save us from nuclear annihilation never caught on. “America’s attitude about fallout shelters had changed,” Nic says. “There was no diminished risk of nuclear war.”

PSCS students got that message loud and clear. Standing in that room, imagining what it would have been like to live underground for two weeks, how could you not?

Tanya led a class called Cupcake Science, which one student admitted to me included “a lot more science than I was expecting.”

In fact, students participated in range of activities, including extracting gluten from flour, visiting local cupcake shops, and learning how to reduce and scale recipes while converting grams to ounces. They watched an episode of the television show “Good Eats,” a brainy but entertaining Food Network show that explores the science of cooking.

And they also explored some chemistry.

I learned this while interviewing two students for this story. They tried explaining an experiment about acids and bases, which used baking soda, baking powder, vinegar, and balloons. The two kept interrupting each other, vehemently insisting that the other was wrong, even though they seemed to be saying the same thing. I lost track of the conversation until one student shouted, “It depends on what acids you put with what bases!” They enthusiastically agreed on that point, then smiled at me and left my office.

Liana’s Music Theory intensive covered just about everything from Bach to Marilyn Manson. Students practiced scales and triads, and worked on note reading for piano as well as their own instrument.

Liana ran the students through exercises in transcribing music, in which students listened to a song and then wrote sheet music for it. Juliana and Henry did “Seven Nation Army,” by the White Stripes; Luke, Margaux, and Claire did Nirvana’s “Come As You Are”; and Tristan and Tynor took Marilyn Manson’s vocal track, finding each of the notes on the piano.

It was an intense week of music. Liana would break things up by having students watch a rock-n-roll documentary or get some exercise in the park.

Scobie’s Insanity Kontraption turned the school upside down for a week, forcing us to re-locate check-in and check-out to a different part of the school. With help from Board of Trustees Vice-President Duncan Moore, Scobie and the students built a Rube Goldberg machine that stretched more than 100 feet and culminated in a work glove, attached to an arm brace used to heal Jamie Forbes’s broken elbow, flipping off the lights.

Some of the highlights included an artificial lung made of duct tape shooting a blow dart at a balloon filed with marbles, and a battery-operated car made by Dexter Vance-Arboit releasing a string that set up the climactic ending.

It took a week to build. It took 60 seconds to run from start to finish.

That’s one week of imagination, problem solving, teamwork and painstaking trial-and-error. But it’s the thrill of those 60 seconds that will be hard to forget. (The team is working on a video of the project. More info soon!)

It was an electric week. At one point, I overheard someone say, “At this moment, there is probably a greater percentage of students actively engaged in some kind of productive learning than at any school for kids this age.”

I thought about that qualifier: “. . . for kids this age.” Those words struck me like a lightning bolt, because I’m constantly trying to figure out what makes PSCS so completely unlike any other school environment I’ve ever been in. This phrase just nailed it.

We’re not surprised to see elementary schools filled with exuberant, enthusiastic energy. But at the upper grade levels, it’s always so stoic. So austere. But it doesn’t have to be that way, and this week at PSCS proved it. Students learned about the Cuban Missile Crisis, acids and bases, Johann Sebastian Bach, and the mental discipline needed to overcome obstacles and reach a goal—in an environment that was as giddy as any kindergarten class.

Soon, the world is going to find out about PSCS. And it’s going to be Beatlemania around here.