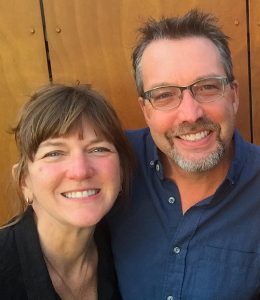 In 1994, Andy Smallman and Melinda Shaw, with the help of an incredibly dedicated and trusting group of parents and students, founded PSCS on the premise that provided a loving and nurturing school environment, regular contact with interesting people and places, and no mandatory academic classes or standardized tests, young people will learn everything they need to lead happy, productive lives.

Andy provided the initial vision and impetus for the school. Having become a Washington-state certified teacher in 1990 and earning a graduate degree in Human Development in 1992, he was frustrated by the lack of trust afforded students in their education. Related, he felt school structures were not keeping up with the times, especially with the introduction of the Internet. His vision for PSCS included a community-based structure involving diverse spaces and dozens of interesting people, as well as making so-called soft skills like kindness an important part of the school culture. As an example, he introduced the concept of "appreciations" at PSCS in the 1990s, something that has been a focused part of the school day ever since.

Melinda was responsible for designing the administrative structure and the initial presentation of the school to the community. She did the bulk of the legwork needed for PSCS to be granted its federally recognized nonprofit status and did so at a time when nothing could be done online. She followed sound business practices, insisting the school do all it could to look professional to outsiders. Put simply, Melinda did things that gave PSCS legitimacy in its early years.

Andy and Melinda, who have been married since 1990, live in northeast Seattle with their dog, Bentsen. They have two adult daughters, also in Seattle, both of whom are PSCS alumnae. Ella '15, graduated from the Oregon Culinary Institute in 2017 and now works for local bakery, Lady Yum. Chloe '10, graduated from Quest University in 2015, got her Master's in School Counseling from Seattle University in 2019, and is currently the school counselor at a local private school. In 2022, Chloe married Alex Kahn '10 who she met at PSCS in 2006.