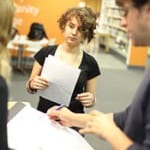 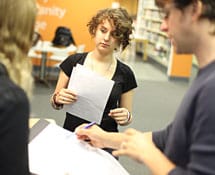 In 2009, PSCS teacher Nic Warmenhoven was right in the middle of rehearsals for the school play, “A Night and Her Stars,” when one of the actors had to leave the cast. With just four weeks remaining before the opening curtain, Nic needed an actor.

“I know a guy who’s not doing anything,” said Murren Kennedy, a senior at the time. His name was Mike Campbell, a 19-year-old friend of Murren who loved acting. Murren and Nic recruited him as an emergency replacement, and Mike filled in admirably. As they say in the theatre business, the show must go on.

Three weeks ago, Murren received a phone call from Nic, who said, “We have a bit of a Mike Campbell situation here.”

And that’s how PSCS alumnus Murren Kennedy joined the cast for this year’s PSCS play, Shakespeare’s “Twelfth Night.” He’ll be playing Sebastian, the twin brother to Viola. The twins get caught up in a case of mistaken identity when Sebastian, once thought to be dead, arrives on the scene near the end of the show.

As always, more than half the school is involved in the production, and everyone who wanted a part in the play has got one. A few students I spoke with agreed that adjusting to the Shakespearean language was a challenge at first, but they picked it up quickly. Nic has coached them on how to use body language, gestures, and emphasis to help the audience keep up with the plot. In addition, the students are using a script that has been slightly modified so that the play is shorter and easier to understand.

“We’re taking on a bigger challenge than we’ve ever taken on,” Nic says. “Shakespeare’s tough. But I think we’ll get plenty of laughs.”

For Murren, being back in a PSCS play has brought back fond memories of past performances. He’s back on stage, right where he belongs.

“In theatre, you have to do it. When you sign up for a play, the show must go on. The idea is that you go on, and you do something. That’s come up with a lot of young actors here, that if you forget your lines, don’t just stand there. Anything can happen, but you still move forward. No matter what.”

The show is playing at the Annex Theatre (1100 E. Pike St. 98122) Thursday, 12/2 through Saturday, 12/4. Doors open at 7 p.m. for a 7:30 p.m. curtain. To purchase tickets in advance, click here. We’re expecting a full house for Friday night’s performance, so please consider planning ahead and buying tickets now.