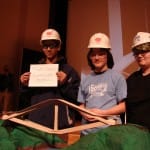 The contest, which was held at the Museum of Flight on February 19, challenges teams of high schoolers from all over Puget Sound to build a bridge weighing no more than 13 ounces to span 29 inches, using only Popsicle sticks and white glue. Engineers use a special hydraulic press to stress each bridge to failure.

The PSCS team designed and built a bridge that withstood a 942 pound load, almost 70 pounds more than the runner-up. In addition, PSCS won the aesthetics competition, earning a perfect score of 100 from the judges, and the title of 1st Place Overall.