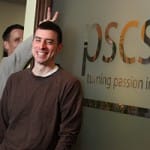 I want to start off the new year by telling the story of what I did over my Winter Break.

My wife and I spent a week in Phoenix visiting relatives, including my brother-in-law Jim and his wife, Anka. Jim and Anka are both performing artists. They met in their early 20’s at a clowning workshop in Chicago, and got married—literally—in a matter of weeks. Anka is from Poland, and the couple eventually moved back to her hometown where they’re raising two little girls, and pursuing careers as performers.

We all sat around the TV and watched a video of Jim’s recent performance on a Polish television show called “Mam Talent” (it’s basically Poland’s version of “America’s Got Talent”). Here’s a link to the video:

Isn’t that great? I asked Jim, How does an American, who still fumbles his way through most conversations in Polish, create a life where he’s now getting stopped on the subway by kids who want his autograph? He gave me a snapshot of their life. They own a home in the city, but there’s not enough space for rehearsal. So they rent that out, while themselves renting a bigger home out in the suburbs. Jim teaches English on the side to a group of Polish guys at a high-tech company, while he and Anka together take care of the kids. In their spare time, they write new material and practice, practice, practice. On weekends, they hit the road for a variety of festivals where they get to do what they love most: perform, and make people laugh. His answer, in short, illuminated the fundamental principle that drives PSCS: they do what they love, and they do it with unrelenting passion, enthusiasm and love.

It was a long night of storytelling, and I was tired. I went into the guest room to get ready for bed when I saw something written on the mirror. It read:

“It’s when the learning stops that you forget how to do a thing. So there is no ‘getting there.’ Back when you thought you were that thing, you were actually in the constant process of becoming that thing. Practice with the intention of learning.”

Jim wrote this four years ago, when he and Anka were living in that house in Phoenix, honing their craft as performing artists in the day and teaching dance lessons at night, saving money so they could move to Poland. One night, Jim was dreaming of the day when they will have “made it” as artists when he realized, there’s no such thing as having “made it.” By practicing your art, you become an artist. When you stop practicing—when you stop learning—you cease to be an artist. Learning is open-ended, a never-ending process.

Related: How to get the highest mark on a college term papers?

Today’s date is interesting from a numeric standpoint: it’s 1/1/11. It seems appropriate on this day to make the decision to put first things first. That means, identify the thing you love to do most and resolve to do that more this year. Do it with unrelenting passion, enthusiasm, and love. For me, that means continuing to tell the story of PSCS, the story of our extraordinary teachers, students, donors, and volunteers, and the story of its inspired vision. This is the story that’s going to change the world.

Back at my family reunion, it was time to say goodbye. All the relatives had gathered for hugs, kisses and wishes for safe travel home. Someone noted the challenge of getting everyone together because travel is expensive and, “None of us are millionaires.”

Anka, holding their one-year-old daughter, smiled at Jim and said, “Not yet.”

Exactly. We’ve got work to do. Let’s get busy.