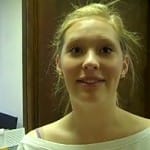 Tanya has set up a table at the front of the school that she calls “bio-curious.” It holds a wide range of things that are living or once were living, a couple microscopes, petri dishes, and an open textbook. She loves biology, so she often spends part of her day just hanging around the table, engaging with individual students who might walk past and wonder, “What’s that?”

She’s brilliant, and her love of biology is absolutely electric. She found an amazing website that has many other interesting biology topics. So when a student came in from outside and noticed a hornet flying around, he instinctively knew to tell her about it.

“That’s not a hornet. That’s a butterfly,” she said. This surprised the student, who was pretty sure he knew the difference between a hornet and butterfly.

“Look at the antennae,” she said. “Those are butterfly antennae, not a hornet’s.” She explained to him a concept in nature in which certain animal species gain an evolutionary advantage when, through genetic mutation, they take on the physical appearance of a completely different species. Basically, looking like a hornet scares off enough of its predators to allow this butterfly to thrive.

She grabbed the textbook and showed him some photos of other animals that also mimic the appearance of more fearsome creatures. They engaged in a lively conversation about all kinds of cool things until, finally, the student paused, looked at her, and smiled. Then he said, simply, “That’s cool.”

To give you an idea of what the bio-curious table looks like in action, here is a video: