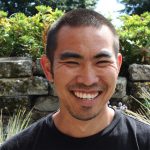 Tim (he/him) grew up in southern California where he developed his love for getting outdoors and basking in the sun. Seattle summers are just right by his standards of warmth. He grew up with an interest in, and a curiosity of, the environment around him—which led him to pursue a biology degree. In order to put that degree to use, he then traveled and conducted research on sea turtles and gopher tortoises for a couple years. After the years of traveling and traversing the research science field he decided to look toward furthering his education and turned his interest toward graduate school.

He had noticed a general disconnect between the researchers and the local communities they were working in, and wanted to work to close that gap through community outreach and collaboative efforts. The competitive nature of the scientific field and general aversion to collaboration across target species and foci yielded few results for him to pursue. He ultimately ended up connecting with the IslandWood/UW graduate program where he went on to finish with a Education for Environment & Community Certificate as well as a masters degree in science education.

After realizing he missed having a more permanent home, he settled down in the Seattle area. He now lives on Bainbridge Island with his partner, Theresa, and cat, Edna, where he spends his free time sleeping, hiking, watching or playing soccer, reading, gaming, or simply sitting in silence.