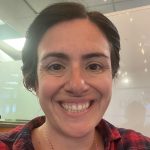 Sieglinde Levery-Nicholas was born and raised in Seattle, living out most of her angsty teen years in the Central District. She graduated from Franklin High School in 1999, spent a year at Cornish College and spent a couple of even angsti-er years trying to write the next great American novel (“Still working on that”). In 2002, Sieglinde packed up a friend’s Dodge Neon and moved cross country to attend UNH in tiny Durham, New Hampshire. “Not only is the East Coast radically different than the Northwest, but Durham is the size of my pinky toe. It was a huge life change.”

Sieglinde spent her last semester of college in Cambridge, England, studying Shakespeare and travel writing. Then after ten years in New England—seven of which were spent working in Development at a small North Shore private school—she was hired as the Director of Advancement by PSCS co-founder, Andy Smallman, working for PSCS from 2012-2020.

Sieglinde recently returned to PSCS as the Director of Community Engagement for May and June, with the potential to continue on in that capacity next school year. Alongside Tim Ichien, Samuel Mitchell, Sieglinde will take part in a schoolwide shift toward a collaborative Co-directorship/Administrative Team—a perhaps somewhat radical notion to some, but a long held idea, originally developed by co-founder, Andy Smallman.

Sieglinde’s primary function is Director of Community Engagement (DOC), which will still include the planning and oversight of PSCS fundraising, marketing, communications, and admissions, but will honor her passion for connection and relationship (both internal and external), as well as allow the dedicated Administrative Team to continue together the work being done every day to ensure PSCS kids are safe, seen, and supported; to ensure every parent and guardian feels like a member of said team; and to ensure transparency, trust, and equity for our staff and community.

Sieglinde lives in Rainier Beach with her husband Drew, whom she’s known since high school (go Quakers), and her son, Oliver.