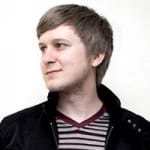 For PSCS alum Jostin Darlington, it all started with a bit of adolescent fun at McDonald’s.

“We had a group of friends sitting at a booth, video taping me as I ordered a large meal,” he remembers. “The plan was that after receiving my food I would trip myself and spill it in front of the rather busy restaurant. It went according to plan, and everyone laughed a lot.”

Jostin was a high schooler at PSCS at the time. After editing his skits into a montage of funny scenes, he wanted to share it with his friends via the Internet. He asked a PSCS staff member to teach a web design class.

He wanted to sell DVDs over the web, so he found up-and-coming musicians who would grant permission to use their music for the soundtrack to his videos. Sending emails to indie bands on websites like MP3.com became an obsession. “We spent more time on MP3.com than anything else at that point in time,” he says.

Jostin and his partners, fellow PSCS students Adrian Kenepah and Jordan Arnold, became inspired by the local music scene. That led to start an online magazine. They threw shows for local bands to promote the magazine, which quickly evolved into charging bands a fee to design websites for them. The business kept growing. Soon, they were signing bands from Cleveland and New York to their fledgling record label.

On his 18th birthday, four months before graduating from PSCS, Jostin got a phone call from a record label in Nashville. They wanted to fly him out for a job interview to lead their new media department. Jostin’s career as an entrepreneur was off and running.

Now, he’s back in Seattle. He quickly grew his high tech startup to 12 employees before it was acquired in 2010. Afterward, Jostin led a team of 10 at a local digital agency delivering brand value to some of the most popular brands on the web and fortune 500 companies.