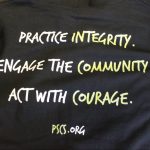 According to the OED, the term Spring has several meanings, including (but not limited to):

2. verb. To spring. Originate or arise from ‘madness and creativity could spring from the same source’

With the season comes change and creativity—sure, perhaps a little madness, but also: opportunity. As many of you might have seen already, PSCS is about to spring forward in a big way, as our very own Mr. Andy Smallman recently wrote to announce his retirement as director of Puget Sound Community School.

“Twenty five years ago Melinda and I started PSCS to allow me to work with students in ways I realized I never could in the other schools I knew. As PSCS grew, the work that fed me – frank, transparent work with students – necessarily took a secondary role to administrative tasks and considerations. I’ve come to recognize it’s time for me to walk a different path and for PSCS to take its next steps infused with new leadership. Progressive education and student-centered learning are enjoying a much broader acceptance right now and I feel proud to have helped shape their foundation at PSCS, along with so many others of you.

Undoubtedly, this decision will seem abrupt to many of you. I’m not sure at this point how it could be any other way. As co-founder and initial visionary of PSCS, my departure would likely seem abrupt whether it had happened five years ago, this year, or five years from now.

PSCS is in a solid place for this transition, with administrators who are prepared to take on this next phase and a wholly competent Board of Trustees — led by Eve Keller, a deeply compassionate human being who is committed to seeing PSCS through this progression from founder-led school to its next expression. I fully trust her and the rest of the board’s ability to guide the unfolding process with an understanding of the school’s roots as well as the needs of a quarter-century-old non-profit in the 21st century. PSCS also holds, at its core, an incredibly dedicated staff who bring decades of collective wisdom to the task at hand.

The challenge to envision ‘a community of global ambassadors for a philosophy that values kindness, wholeness, and social justice’ is not mine, but all of ours. It’s been my privilege to lead the staff and sit beside the board as they strive to embody that vision. Undoubtedly, these fine people will continue to reflect and inspire those values in the work ahead.

I look forward to connecting with you over the next several months to share memories, and to say our informal and formal goodbyes. I want to thank everyone, but particularly our current families, in advance, for your commitment to helping the school through this transition. This will be a big change for the community, but the chance to evolve is also exciting and timely. It will be my pleasure to watch (and help) PSCS grow into a fuller articulation of our shared values.”

As Andy mentioned, we have an administration equipped to take on this new evolution, an incredible, dedicated staff, and wholly competent board leadership, helmed by Eve Keller, who will be spearheading the next steps for PSCS.

“The board is committed to taking all of the necessary steps to keep PSCS running smoothly, as it transitions into it’s next phase…Over the next few months, I invite you to join us in celebrating Andy and Melinda’s remarkable life achievements, represented by the nearly 25 years PSCS has been in operation.”

There will be several opportunities coming up to connect with Andy as we near the end of the school year. Join us for some or all of them and know that while we here at PSCS are sad to see Andy leave, we are excited for his next phase and all of ours.

With your support, PSCS is poised to continue Andy’s and Melinda’s deep work, keeping the school focused on sending compassionate self advocates into the world—exceptional young people who care about community and seek to discover the world outside their windows…