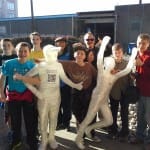 Ricky the Hitchhiker was sculpted with a protruding thumb, designed to travel cross country. Lucy the Climber was sculpted to look like a student climbing a wall, fence, or any manner of scaleable city.

Both sculptures were randomly dropped off in Seattle’s Pike Place Market on January 24, 2014, with QR codes taped to their chests. Within less than an hour, Ricky had already began his adventure!