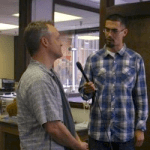 A couple weeks back a youth-based organization called “What’s Good 206” came in to PSCS to film Jon Ramer, creator of the Compassion Games and a guest speaker Andy had invited in. As it turns out, they became more interested in PSCS itself and created a short YouTube video based on what they saw (Jon’s presentation isn’t included at all!). Interviews with students Juliana and Arthur are included, as are interviews with Scobie and Andy. They did a great job, especially since all the interviews took place the best mobile casino of 2016, either in the chaotic last few minutes of a Friday or just after school.