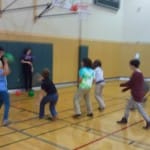 Late in the school day on Monday Andy took a group of 12 PSCS students to an indoor gym a block from the school that we use for physical fitness activities. As expected, they started up a game of Mushroom Ball.

Mushroom Ball? Never heard of that, you say?

Basically, it’s a non-stop version of dodgeball in which it’s “every person for him/herself.” If you get hit, you take a seat until the person who hit you gets hit, whereupon you are immediately back in play. Since it’s virtually impossible for one person to get everyone else out, the game typically goes on and on.

And the students love it.

This photo is from just after the end of the game. Two of the kids are quite good at Mushroom Ball, so much so that they repeatedly got the other kids out. Andy asked if they’d be willing to just stand still and let the other kids pelt them with the balls (no worries, the balls are quite soft). You know, let them get out any remaining aggression or frustration.

With big smiles on their faces they both said yes. Then they stood there and got bombarded with balls, smiles intact.

Wow. What a time, friends. COVID-19 has brought a lot into perspective, hasn’t it? Our hearts and minds are with you all as we navigate this slow rollercoaster and toggle daily between self-care, family-care, and community-care. Although it’s difficult to be separated from each other, as a relationship-driven school PSCS has been uniquely situated to maintain togetherness and elevate wholeness, even remotely. Staff and students continue to offer classes and activities during the school week, daily community check ins, affinity groups, one-on-one and group advising, online gatherings and events, while also ensuring options and pathways are set up for each student and family—knowing everyone’s needs and abilities are hugely varied at this time. Students, staff, board, and parents are collaborating and learning, preparing for multiple scenarios, while continuing the daily traditions that keep us heart-centered.

Please check out our Remote Community Page to keep up, connect, and find out more.