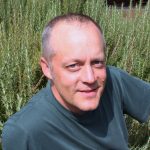 PSCS Teaching Staff member, Scobie Puchtler, was born in Thailand and raised in Laos and Alaska. And that was before his family got really serious about moving in order to kick start his stepfather’s science career, at which point he attended four public high schools from Florida to New Hampshire, before earning an art and design degree from Yale. Post-college, he lived briefly in Brooklyn New York as a woodworker, then finally settled in Seattle, where he co-founded a high-tech kite manufacturing company that still sells kites all over the world. These days, he’s experiencing mild disbelief that this will be his 11th year on the PSCS teaching staff.

Scobie is in love with what wings can do, from the flight mastery of barn swallows to the possibilities of electric aviation. His current flying machine is a high-performance customized backcountry aircraft that recently took him – with his 10-year-old son as copilot – on a trip through British Columbia and all over Alaska, landing and camping on riverbanks and tundra-covered mountain ridges.

Scobie is a writer, artist, inventor, maker, musician, and communicator with a deep belief in human development, human healing, and human connection. He delights in sharing his life’s many connections with the school. Just one example is having twice co-facilitated a Holocaust History intensive with his mother in law, a professor of history at San Francisco State University and Stanford.

Over the years, Scobie has offered instruction in weight training, geometry, writing, storytelling, aviation, origami, contraption making, literature, and drawing. He’s coached students to victory in structural engineering competitions, helped them become better musicians, built boats with them, and guided them through courses focused on human experience from addiction to adoption.

Scobie lives happily in North Seattle with his wife Sarah of over 20 years, their son Brayden (a PSCS student), and two cat friends, Shade and Salem. But if the sky is open and you have a few hours to spare, he’d leave home in a heartbeat to take you flying!