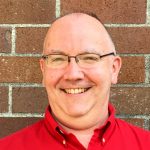 Michael (he/him) may have written more bios for PSCS than anyone in the world, having been involved with the school for nearly half his life. He was first invited to be a guest speaker for many of the founding students in the 1990s when he was working to address climate change by publishing an email newsletter about avoiding consumerism and reducing waste.  Then he was mentor to two PSCS students who wanted to apprentice at the game publishing company he’d co-founded.  Eventually, he was a volunteer instructor (when classes were referred to as “tutorials” and the school was nomadic), a board member when the school transitioned to a site-based school, and eventually board president before taking a full-time teaching role here.

When he’s not at PSCS, he’s encouraging women and people of color to become entrepreneurs, first as a consultant/coach for entrepreneurs, then a “business assistance officer” at the Washington Women’s Business Center, and today teaching classes for new business owners at the Seattle Public Library, North Seattle Community College, and Seattle Central, among other places.  He helps people use data to make better decisions, and to think more strategically and rigorously.

He loves playing Bach organ music because of the technical skill required (even if he sometimes doesn’t have the skill to play them quite at the level he’d like).  Bach’s music has also been described as “mathematical,” which has an appealing complexity as well.

His current big learning project is becoming a video game developer.  The plan is to tackle C# in the Unity real-time engine first, then learn C++ in Unreal Engine afterwards.  He lives with his partner of twentysomething years and his Pacific chorus frog, Trevor.  And no, he doesn’t like coffee.  Tea only.  Ironic, isn’t it?