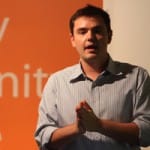 YouTube phenomenon Matt Harding, whose video “Where the Hell is Matt?” has generated more than 30 million page views, did a talk at PSCS about pursuing his passion. Matt has turned his passion for travel into a job by creating inspiring videos of his trips for corporate sponsors. Here’s some of his story:

“I started pretty much just playing video games all the time. Growing up and going to school, I wasn’t very good at being a student. I screwed up during my academic career so when I finished high school, college wasn’t really an option for me. I didn’t have the grades that would get me into a good school. So I focused on video games.

“I got really lucky with that and ended up writing for video game magazines, and then getting a job at Activision in Los Angeles when I was 19. But after a couple years, I reached a point where the thing I thought I wanted to do for the rest of my life . . . wasn’t really what I wanted to do. I liked playing games, I wasn’t really cut out for making them.

“So I decided to take a trip. Really quickly, I discovered this was something I Ioved. And, I was good at it.

“I had in my pocket this little video camera, and we were taking pictures in Hanoi and my friend said, ‘Why don’t you go stand on the curb and do that stupid dance you do.’ I discovered that doing this little dance on a video was interesting because you could put them together and it turned into something bigger. I got home from my trip and put this video up on my website. It ended up getting found, then passed around, and one morning I woke up and 60,000 people had watched my video. I would be on a road trip and I’d stop at a gas station to check my email, and there would be hundreds of messages. I was getting invited to the Today show the Ellen show.

“In the midst of all that, I got an email from Stride [Gum Company]. They said, ‘We’re bringing out a new gum and we want one of these viral videos that everyone is talking about. Can you make one of these for us?’ I said, ‘Well, I’m broke. I made this one and now I don’t have any money left.’ They said, ‘We’ll pay you to make another one for us.’

“I knew by that time that I didn’t want to be making video games anymore. But it was all I had done, so it was all I could get work doing. What I really wanted to do was travel. I had this big opening in my life for this to happen, and—boom!—it did.”

The message to students was simple. When you move in the direction of doing what you love, you may not end up at the destination you had in mind. But taking that step—trusting yourself enough to take that step—will lead you to the place you’re meant to be. There’s no way Matt Harding could have planned his life as . . . it seems silly to write this, but it’s true . . . a professional dancer. But you can’t plan an inspired life. The best you can do is to simply leave yourself open to the infinite universe of what’s possible.

There are no upcoming events.