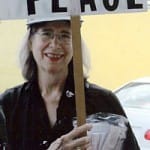 When you first meet her, PSCS friend and supporter, ’Lyn Lambert, doesn’t seem like a troublemaker. But for someone whose credo is “Peace on earth, goodwill to all,” she’s done more than her share of rocking the boat.

’Lyn is a member of a group called Women in Black, which stands together every Saturday on a Bellevue street corner to carry on a silent vigil for peace and justice in the world. The group formed after the 9/11 attacks, when letters to the president and members of Congress went unanswered.

“We took an awful lot of flak in the early days of our stance. We’ve been called some very unflattering names,” she says. “But that rarely happens of late.”

The Women in Black are carrying on a long tradition that has been maintained by women in Israel and Palestine, the Black Sash Women in South Africa, and Mothers of Plaza de Mayo in Argentina.

“One thing I see that the Women in Black are accomplishing is the encouragement of other timid souls who believe in peace but are reluctant to speak out,” she says. “In the more than seven years that we’ve held our vigil, more and more people come up to thank us for what we are doing.”

On September 11, from noon until 1 p.m., ’Lyn will be outside Bellevue Square. She’ll be wearing black. Standing in silence.

“Many years ago,” she says, “poet Angela Morgan wrote ‘Mothers of Little Sons’ and in it she declared that ‘ . . . war is a knave’s design and a coward’s brutal scheme, but [those] whose courage is divine will foster a noble dream.’ I believe Women in Black and other peace workers—and all who support them—are out there in war-torn and war-making countries around the world, fostering that ‘noble dream.’ And, I suppose we’ll dream on as long as it takes . . .”