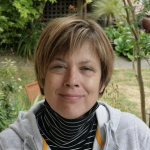 Eve Keller is the President of the PSCS Board of Trustees. She is also an artist who lives and works in the Mt. Baker neighborhood of Seattle, and is the proud mother of recent college graduate Sally Roberts. After growing up in Indianapolis, IN, Eve found her way to Seattle in 1986, and PSCS in 2015.

The graduation ceremonies of PSCS keep Eve coming back for more, and she believes the capacity of these young PSCS adults to exhibit their maturity and ability to receive feedback and compliments from an audience of family and friends, is a phenomenal measure of the school’s success.  Emotional maturity has found a home at this school.

Lastly, Eve is formerly an entertainment industry creature builder, having lived in New York City and London while working for Jim Henson of “The Muppets”, the British program “Spitting Image” and the film “Little Shop of Horrors.”