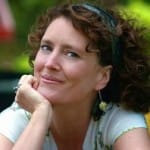 When PSCS is looking to hire a new teacher, one of the prerequisites is finding people who have a variety of interests and are excited about life. When Danika Dinsmore met PSCS founder Andy Smallman in 1997, it was clear that she was a perfect match.

“We met for lunch and I’m pretty sure we talked for a few hours,” says Danika, who has been everything from an arts administrator, new media director, on set tutor, event producer, filmmaker, and spoken word artist. “It was pretty obvious that we had similar educational philosophies.”

Danika spent three years at PSCS. She engaged students in activities like taking them to poetry slams, putting together a ‘zine called “More Than Your Mother,” and leading a field trip to a farm for abused animals. She even took her improv class to the supermarket.

“At some point I brought up the concept of ‘guerilla art’ and groups that did improv out in public,” she remembers. “This was in the late 90’s before all the urban pranksters and flash mobs got popular via the Internet. We worked out a scenario where I was the shopper and the students were the pranksters. At one point another shopper kindly told me that kids were stealing things out of my cart.”

Now she’s a professional writer. Her first novel, Brigitta of the White Forest, was just released by the Seattle-based en theos press. It’s a fantasy adventure series for middle school-age kids. In fact, Danika enlisted the help of some PSCS students last year to read the story and offer feedback.

Life as a storyteller is hard work, she says.

“It’s pure perseverance,” she says. “You have to really want it because it’s hard work to stay motivated when you work from home, get your 5th rejection notice, and have to edit something for the 10th time. You have to love it and have tough skin.”

There are no upcoming events.