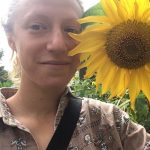 If Hannah Blacksin were a lichen, her compositional makeup of algae and fungus would be represented by English and Science. She revels in the puzzling joy of the written word and the interconnectivity of the natural world. Born and raised in the forested hills of Western Massachusetts, she grew up reading books in a treehouse and studying her family’s compost bin. She received her BA in English from Lewis and Clark and planned to become a writer or editor or publisher. After graduating, she moved back to the East Coast to work as an outdoor educator, on a friend’s cosmic recommendation.

One fateful evening, Hannah applied to both a Masters program in Outdoor Environmental and Sustainability Education at the University of Edinburgh, and a job leading experiential education programs in Southeast Asia. Soon, She found herself commuting every few months between Scotland and the hub of Bangkok. Living itinerantly since college, she finally decided to live in one place, for one year. She found herself in Seattle, working in a fourth-grade classroom at Open Window School. Two years later, she is excited to begin teaching at PSCS! She is gleeful to join a community that empowers her lichen-self: made up of multiple passions, growth-oriented, and interconnected with the broader community.

Hannah currently lives in Wallingford with three delightful housemates who all enjoy backpacking and cooking meals laden with as many vegetables as possible. When not teaching, you can catch her speeding by on her bicycle, memorizing a poem, jamming to funky beats, and becoming too competitive while completing a crossword — all at the same time.