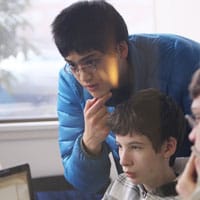 “He definitely knows what he’s talking about,” says Arthur Hill, a student in Alex’s computer game programming class. “When he gets into something he’s passionate about, you can really tell.”

In this way, Alex fits right in at PSCS. The goal of the school’s volunteer program is to connect students with talented people of high character who are excited by what they do. 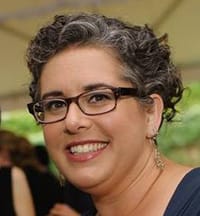 PSCS friend and supporter, Dana Bettinger, earned a bachelor’s degree in architecture from Pratt Institute and then a master’s degree from Yale University, but after seven years as an architect—including time spent running her own design firm—she returned to graduate school and became a teacher. Dana taught art, architecture, and stagecraft at University Prep for over a decade, and previously served as the president of the PSCS Board of Trustees.

She was initially attracted by the school’s progressive philosophy.

“You don’t hear students at PSCS talking about what they’ll do when they’re finally ‘in the real world,’” she says. “Our students understand that they’re being given the freedom and support to pursue ‘real life’ right now, instead of constantly being trained for some future experience.”

Dana may have been drawn in by the idea of progressive education theory put to practice, but the best part of serving on the board is being a part of such an extraordinary group of individuals.

“I get to interact in such a thoughtful way with all of the incredible people who make up our community,” she says, “from students to parents to other volunteers. They’re smart, engaged, and always inspiring.”

The community is at its best, Dana says, at its unique graduation ceremony. Seniors are honored individually in an event that, in some years, has lasted more than seven hours.

“It is an incredible opportunity to see a group of strong, fascinating young people reveal their true selves in creative, eloquent ways—and then be comfortable allowing the people who love them to share their experience in such a public way.”